Environmental groups stepped up their Facebook political ad spending in July while the National Police Federation pulled back.

While the pandemic remained a key issue for some advertisers over the last week of July, the environment and public policy issues took greater prominence among the top 25 Canadian political advertisers on Facebook. This continues a trend we have observed in recent months where political advertisers have adjusted their messages as the pandemic moves on to a new phase in Canada. As a continuing part of our transparency initiative, we are looking each month at some of the top advertisers on Facebook and the issues on which they hope to influence Canadians’ thoughts and opinions.

In April, charities, NGOs and health care organizations seeking donations to support their efforts in the battle against the virus were among the top advertisers. In May and June, we found that advocacy groups were the most common political advertisers. These groups advocate for variety of issues including protecting the environment, human rights, promoting Canada’s energy industry and policing. The police federation has been among the top political advertisers on Facebook for the past few months.

Here’s our analysis of Political advertisers for the period between July 26 to Aug. 1.

Seven themes emerged from a closer review of the top 25 advertisers in the last week of July, though advertisers in each area cover a wide range of issues at local and international levels with their ads.

Advocacy groups remained the most common Canadian political advertisers on Facebook during this period, with many focusing on environmental issues.

The David Suzuki Foundation/Fondation David Suzuki remained in the top 10 in the last week of July with ads purchased through its French- and English-language Facebook pages. Its ads address a variety of issues, including climate change, promoting a green economic recovery from COVID-19 as well as wildlife and habitat protection. They also appear to target a range of demographics, though one, seen in Figure 1 below, appears to specifically target Alberta and Ontario.

Three other advocacy groups use their Facebook advertisements to raise awareness of, or lobby on public policy issues: The Canadian Taxpayers Association, The National Police Federation and No to No Fault, which opposes a move to no fault insurance in the province of British Columbia.

The National Police Federation (NPF) has been a leading advertiser on Facebook since April. As the #BlackLivesMatter protests and calls to #defundthepolice picked up, the RCMP also increased their spending and introduced new visuals and texts, running 208 ads in June. Gone was the tagline line, “RCMP members are always here for you” and came in the new tag line, “RCMP members are proud to serve all Canadians”. However, in late July as the protests subsided, there was a noticeable drop in the number of ads by the NPF. During the last week of July, the NPF ran only 45 ads and spent $2,577 via two Facebook pages, “National Police Federation” and “Surrey’s Say on Policing”.

As in previous months, NGOs remained among the top advertisers in the last week of July with seven advertisers that fall within this category. NGOs are using their ads to raise donations and highlight their work in less developed countries to fight poverty, and to protect vulnerable communities such as refugees and young people.

The organization used its ads to seek donations and to highlight the impact of COVID-19 on its supply chains and on health care in Vulnerable communities around the world. In early August, the group started running advertisements to call for affordability of COVID-19 vaccines.

Plan International Canada was the number two advertiser in dollar amount, spending $18,381 on 153 advertisements. This is an increase over the last week of June, when it spent $5,486 to buy 47 ads. The group’s ads address variety of issues, including preventing gender-based violence, protecting girls from female genital mutilation and access to contraceptives and education protection for young women. A review of the group’s ads in Facebook’s library reveals many were shown predominantly to women, as seen in the ad in Figure 4 below.

Four advertisers were identified as business lobby/advocacy organizations. UnSmoke Canada was the largest advertiser in terms of dollar amount, outstripping other advertisers in the last week of July. UnSmoke Canada is a website run by Rothmans, Bensons and Hedges, Inc. It encourages people to quit smoking or to move to alternatives to cigarettes. UnSmoke also seeks to ease advertising regulations for vaping products.

Its ads are seen by a variety of demographics, but in several cases some ads are seen only by men, or by women, as seen in Figure 5 below.

The Canadian Association of Petroleum Producers (CAPP) has been a consistent advertiser on Facebook in recent months. In the last week of July, CAPP bought 68 ads, spending $1,193 on two pages: Canadian Association of Petroleum Producers and Canada’s Energy Citizens. The number of advertisements the association bought changed little compared to the same period in the previous three months, when it bought 70 ads in June and 69 ads in both may and April. The association’s ads focus on Canadian oil and gas industry and development of pipeline projects.

TakeCare Supply emerged as a top advertiser in July with 142 ads and $3,539 spent in the last week of July. Its ads promote its reusable cloth masks as Canadian-made and to say it has created 200 jobs in the process.

No political parties ranked in the top 25 in the last week of July, but two candidates at different political levels were leading advertisers on Facebook over that period.

All four candidates vying for leadership of the Conservative Party of Canada have purchased advertisements on Facebook, but Peter MacKay was the only one to rank in the top 25 in the last week of July. Over this period, the campaign paid $6,234 for 103 ads. This is nearly half the number of ads he bought in the same timeframe in June, but the amount spent on advertising was similar. MacKay’s ads feature his stance on issues including gun control, job creation, and maintaining unity within the party.

Saskatoon mayoral candidate Rob Norris edged into the top 25 with 43 advertisements. Campaign advertisements for the former Saskatchewan MLA address a variety of issues, including support for police, opposition to bike lanes and calling out an opponent for increasing property taxes.

One think tank, Vancouver-based Fraser Institute that has been described by some as politically conservative and libertarian, decreased its Facebook advertising somewhat in the last week of July with 55 ads, compared to 72 ads in the last week of June. The institute’s ads covered a range of topics, from housing affordability in Canada and provincial finances in Alberta, to Business investment in Canadian provinces and federal emergency spending on COVID-19 response programs.

One union, the Canadian Union of Public Employees (CUPE) – Alberta Region, was among Canada’s top 25 political advertisers on Facebook in the last week of July, spending $6,979 for 46 ads. The union’s ads oppose any move to replace the Canadian Pension Plan with an Alberta pension plan and targets Bill-32, which was signed by Alberta’s Lieutenant Governor on July 29. The legislation includes new rules for unions and workplace standards, including limits on union spending on political activities, as well as changes to holiday pay rules, overtime and temporary layoff notices.

One utility, Efficiency Nova Scotia, was the number 25 political advertisers on Facebook in the last week of July with 38 ads. It is the first energy efficiency utility in Canada, partnering with energy efficiency projects in the province.

And the beat goes on…

COVID-19 cases in Canada may have declined from their peak in the spring, but the pandemic is far from over. The number of cases continue to rise internationally and some countries are seeing a resurgence of the virus in a second wave of cases. This has seen the return of strict lockdowns in some countries, such as Australia and the Philippines. Canadian restrictions, meanwhile, have been easing. As the pandemic moderates in Canada, it is natural that people’s attention will turn to other issues and, as a result, advertisers will look to sway people’s opinions.

Who is running Facebook political ads during the pandemic in Canada? [Update: June 2020] 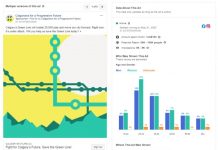