Note: This blog post is part of a series entitled Facestumping – Presidential Campaigning on Facebook.  The link to the  first post in this series,”Thanks Be From Trump? Facestumping – Presidential Campaigning on Facebook (Part 1)” can be found here. Over the next few days we will be sharing additional blog posts featuring an analysis of Facebook posts from other leading US presidential candidate including Hillary Clinton, Ted Cruz and Marco Rubio.

We, The Bernie Revolutionaries 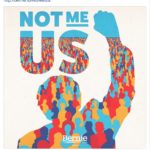 Bernie Sanders proudly describes himself as a “socialist” (or a “democratic socialist”). His Facebook Page is a reflection of his revolutionary manifesto; the posts are all about the collective “we”. No other candidate uses the first person plural voice as much as Sanders, with 78% of his Facebook posts including pronouns such as we, our, and us. When speaking in the first person singular, Sanders still manages to invoke the collective. Even his modest use of hashtags (in 12 per cent of posts) features similar terms such as #VoteTogether and #NotMeUs. This inclusive voice helps Sanders “express solidarity with the group” and position himself as a man of the people. ( See Fig.1 Pronouns Usage)

This is not to say that Sanders’ Facebook page isn’t managed – it most certainly is. As noted in the section on Trump, Sanders’ Page makes use of Facebook hacks, such as adding historic events to the Timeline, and posting pictures that make for a better collage in the featured Photos section. (See Ex. 1  Use of Facebook Hacks)

Sanders quotes are more often posted inside of images, rather than as coming from his own first person singular voice – as Trump does. And campaign videos aimed at helping supporters caucus in specific states are clearly created by the campaign, featuring volunteers and supposed regular people on the street. Sanders is not likely to have created, much less posted, any of this content himself.

However, given that Sanders (along with Rubio) made the fewest posts to Facebook during the period studied, his campaign resources for social media outreach could be significantly more modest than say that of Clinton. Campaign funding seems to support this, with Clinton having raised nearly twice as much and spending $15.9 million more to date.

Sanders’ posts stay on message, with keywords from his campaign slogan “A political revolution is coming.” appearing in the most used words as identified by Netlytic. ( See Ex.2 and Fig. 2)

And while Sanders obviously discusses the campaign, as indicated by his most used words, manual review of his top 25 most liked Facebook posts during the week February 2-19, 2016 suggested that he made more mentions on key issues than any other candidate. Perhaps less surprisingly, the economy was mentioned in 44% of Sanders’ most liked posts. ( See Ex. 3 and Fig. 3)

Despite posting less frequently than Clinton, Sanders enjoys more Page likes and comparable rates of being talked about on Facebook. (See Fig. 4 and Fig. 5)

Sanders’s Facebook posts reflect a serious politician concerned about key issues.  The use of “we” positions Sanders as a man of the people, pursuing the presidency solely on their behalf. The Sanders campaign is more traditional, and those managing his social media are not attempting to create an illusion that Bernie himself is posting. The Facebook posts stay on message, repeating Sanders’ call for a political revolution. The Sanders campaign includes a modest, but steady use of Facebook, reinforcing the image that Bernie is a humble man from simple origins. Indeed, most references to other people – such as the Pope – are used as a means to introduce an issue, rather than a personal endorsement. And while legions of online supporters fuel groups such as Bernie Sanders’ Dank Meme Stash with its nearly 400,000 members, if Sanders is unable to translate his popular following into hard votes, his campaign risks being another example of slackativism.

Facebook and other social media sites are transforming our politics. Today, when politicians such as Hillary Clinton, Donald Trump or Jeb Bush want to attract voters’ attention, they turn to social media. Within seconds, a well-timed tweet or Facebook post can be delivered directly into the hands of supporters and the public at large.  For example, when Jeb Bush announced his intention to run for the US presidency, he used Facebook to make the announcement.

As more candidates and parties flock to social media, it is now easier to analyse a candidate’s campaign, both in terms of messaging and engagement, to determine how effective they are at using social media platform such as Facebook and to connect to their supporters. Knowing how, when, and what a candidate posts on social media says a lot about how they position themselves on the political stage, their campaign resources, their relative social media savviness – and even their personality – arguably all things that dictate where presidential hopefuls will land in polling.

As part of the Lab’s ongoing  research on how social media is changing the ways in which people communicate, we have been collecting and analyzing publicly available Facebook posts found on the official Facebook Pages of the five leading U.S. presidential candidates: Donald Trump, Hillary Clinton, Bernie Sanders, Ted Cruz and Marco Rubio. The dataset used for this post was collected during a period of one month from January 21 to February 22, 2016. To analyse the posts collected we used the Lab’s automated social media analytics tool Netlytic.  In addition, we also manually reviewed and coded a small subset of the dataset containing the 25 most Liked posts from a two week period between February 2 and February 19, 2016. We opted to study Facebook post for this research as the social network enjoys the highest rate of usage by Americans, with 71% of the online U.S. adult population enrolled.  And Americans are using Facebook to discuss politics. Of the most talked about topics on Facebook (both globally and in America) in 2015, the U.S. presidential elections topped the list. 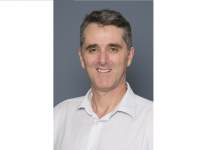 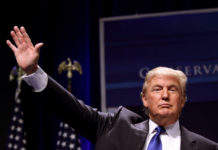 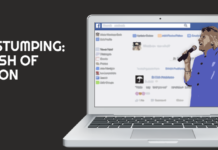 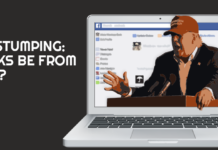 Thanks Be From Trump? Facestumping – Presidential Campaigning on Facebook (Part 1)