Canada is in the midst of one of its longest election periods ever. There are less three weeks left till Election Day, and the party leaders are working hard to get our attention in any which way they can.   But before the tour buses hit the road and yard signs hit the ground, the leaders had long been campaigning through another channel: social media.

New research from a MA student at Ryerson University examined how leaders of the three largest parties: CPC’s Stephen Harper, LPC’s Justin Trudeau and NDP’s Thomas Mulcair used Twitter for the months of February and March 2015.  The findings suggest their accounts serve as campaign vessels, rather than instruments of genuine digital dialogue. In short, these social media initiatives are more strategic than social.

The leaders’ affinity for self-promotion may come as no surprise to many out there, but as the research shows, it is the way in which they promote themselves that proves most interesting.  In the political realm, favourable perceptions are rich in political capital (i.e. votes). Understanding how the leaders project themselves to the public therefore reflects the qualities they believe [voting] Canadians want to see in their leaders.

So what are Stephen Harper, Thomas Mulcair, and Justin Trudeau’s online Twitter personas?  The Harper account confirms the Conservative Leader’s proven leadership by emphasizing his ceremonial duties and track record as Canada’s Prime Minister.  Reinforcing the PM’s function as a strong economic manager, the account frequently @mentioned businesses and business leaders.  The account also humanized the PM through the notably strong presence of his wife, Laureen.  Building a sense of the PM’s character, the account presents Harper as your average, Tim Horton’s drinking, sports fan and family guy, who is the only candidate suited to run the country. 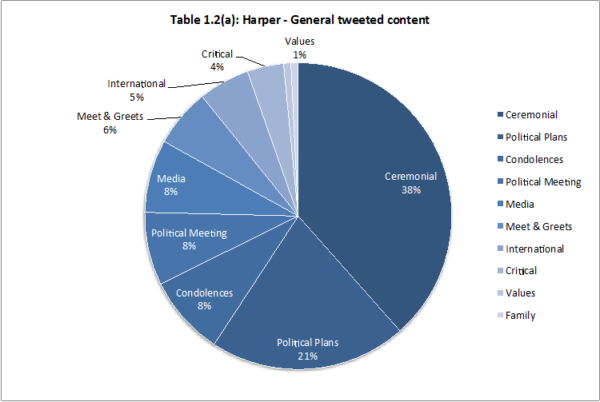 The Mulcair account embodies the Outremont MP’s parliamentary position as the Leader of the Opposition.  Not only is the account used as a platform to further broadcast critical reflections against the government, but it also uniquely includes links to e-petitions opposing legislation.  A softer side of Mulcair, however, is presented to complement his scrutinizing responsibility in the Commons.  Of all images posted on the three leaders’ accounts, Mulcair was most likely to be featured with a smile upon his face.  Counterbalancing perceptions of Mulcair’s angry demeanour, the account projects an experienced yet lighthearted “Tom”. 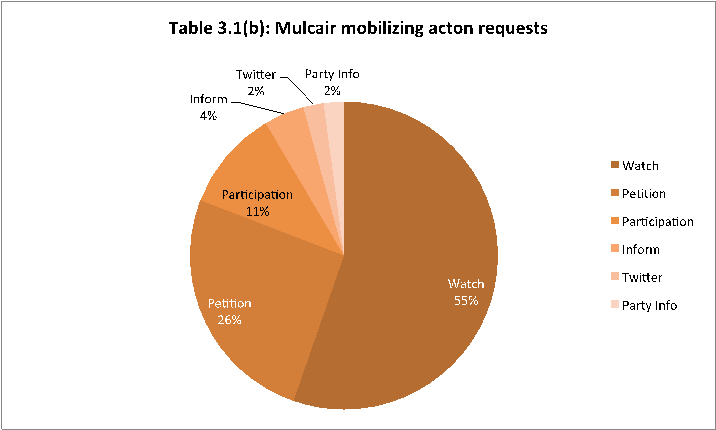 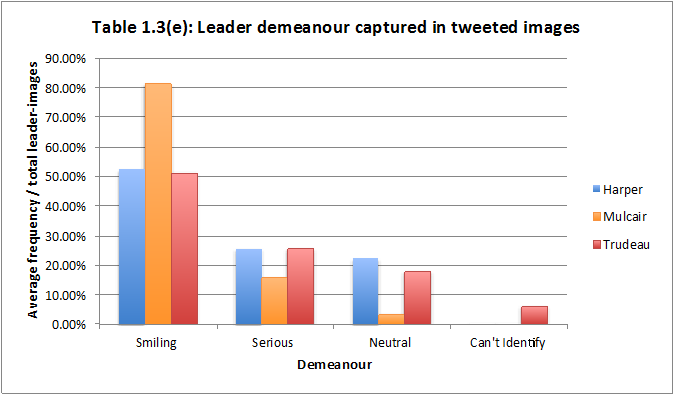 The Trudeau account accentuates the hardworking team behind the Liberal leader, otherwise known as Team Trudeau.  The account regularly connected with Liberal MPs and candidates and aired gratitude towards the party’s loyal volunteers via hashtags and @mentions.  Signaling his readiness for the executive position, the account frequently posted images of Trudeau formally attired, intently engaged in meetings, and shaking hands with prominent public figures.  By combating assertions questioning Trudeau’s political experience in this manner, the account affirms his executive qualities and capability to lead his team back into the hearts of Canadians.

While the campaigns continue to ramp up until E-day, consider how the leaders’ online personas complement their offline actions.  Is Harper underscoring his longstanding role as Prime Minister?  Does Mulcair appear to highlight his tender side (think holding a smile or referencing his role as a grandfather)?  Is Trudeau notably quick to support statements with facts to stress his political knowledge and experience? Stay tuned!

Want a better look at the leaders’ social media habits? Check out Ryerson Social Media Lab’s new PoliDashboard and see how the election unfolds in the Twitterverse. The dashboard is a free, real-time Twitter listening tool designed to help voters, members of the media, and campaign staffers to monitor Twitter conversations about the 42nd Canadian Federal Election. It collects, analyzes, and visualizes tweets containing the #CDNpoli and/or the #Elxn42 hashtags in real-time.

Conducted over a two-month period during February and March 2015, the research employed a multi-stage analysis informed by practice-based and theoretical approaches. In the initial stage of the analysis, all of the leaders tweets were collected and coded according to the presence or absence of indicators that corresponded to five overarching categories. Once completed, the results of selective indicators underwent the second stage of analysis. Here, the indicators were further refined and categorized to reflect the distinct traits and themes inherent within each account. Overall, a combined total of 538 tweets were coded and analyzed: 135 for Harper, 180 for Mulcair, and 223 for Trudeau.

Note: This guest blog gives the views of the authors, and not the position of the Social Media Lab, nor of Ryerson University.  Alex research work was done under the supervision of Dr. Greg Elmer, the Director of the Infoscape Lab at Ryerson University. This blog post was written by Alexandra DiGioseffo (@adigioseffo) with editing by Philip Mai (@phmai).

Bio: Alexandra (Alex) DiGioseffo is a graduate student and part-time meanderer currently stationed in Toronto.  In 2012, she obtained her B.A. in Communications and Philosophy from Carleton University.  After living and working in England for two years as an Education Assistant at the Houses of Parliament, Alex is back in Canada and recently completed her Masters in Communication and Culture at Ryerson University.  Interested in political branding and citizen apathy, she hopes to see the Canadian youth voter turnout above 50% in her lifetime.