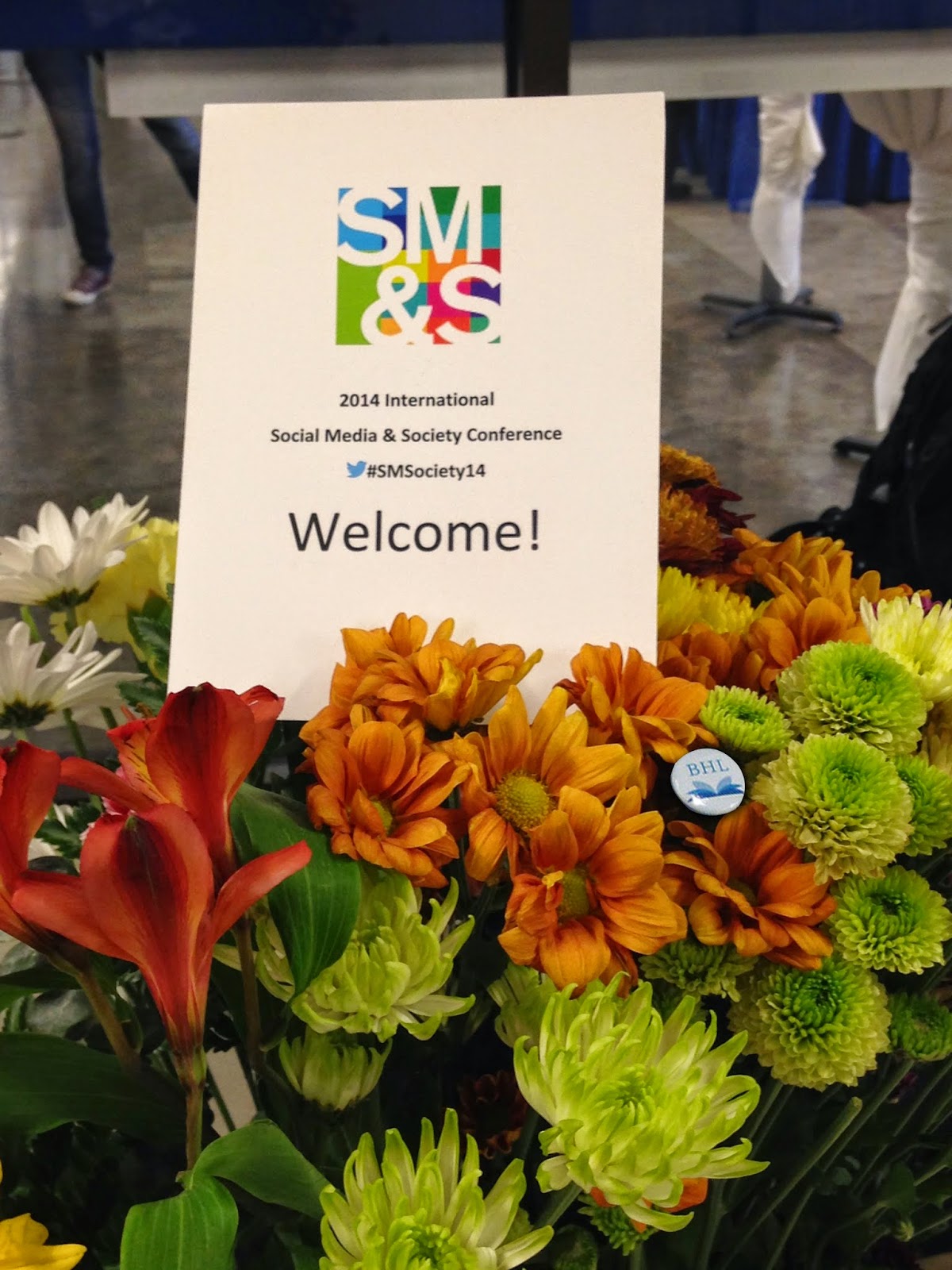 This question was the fundamental discussion point of the Social Media and Society 2014 conference in Toronto, Canada, Sept. 27-28, 2014. Now in its fifth year, the conference, organized by the Social Media Lab at Ryerson University (a partner in the Mining Biodiversity project funded by the IMLS Digging Into Data Challenge, of which BHL is also a participant), brings together researchers and practitioners across a broad range of social media related fields to discuss current research and best practices in social media, as well as its application to society at large.

BHL Outreach and Communication Manager, Grace Costantino, was invited to attend the conference. As the manager of BHL’s social media networks (Twitter, Facebook, blog, Flickr, Pinterest), she was eager to connect with other professionals, discover current trends, and investigate best practices and new directions for BHL social media.

The conference discussed a variety of topics, including social media’s effect on relationships and voice; differences among genders in social media participation; privacy; deciphering influence within social media; social media as a marketing platform; use of social media within science communication; how scholars use social networks; and altmetrics.

Several interesting findings and further questions emerged within these topics.

Along another avenue of research involving social media and politics, Hampton found that social media does not make people more inclined to engage in political conversations online. While 86% of surveyed participants expressed a willingness to discuss a political topic offline, only 42% were willing to share their opinions online, and only .3% said they were willing to discuss them online but not offline. The reason for this may be the persistent nature of social media; once an opinion is voiced, it is very difficult to erase it. People were also more willing to share when they believed that their network of followers were sympathetic to their viewpoints.

Finally, in regards to stress and social media, Hampton found that women who use social media felt less psychological stress but more social stress, while men generally did not display any correlation between social media use and stress (though they may feel some social stress when hearing about a friend’s demotion or interaction with a crime).

One panel within the conference presented research investigating the facets of influence within social media, and how to identify influential users. The general definition of influence in this context was those individuals most likely to disperse information within a network. Elizabeth Dubois of the Oxford Internet Institute proposed four facets of influence (popularity, interaction, knowledge, and social embeddedness), and depending on the facet used, different influencers emerged. Weiai Xu of the University of Buffalo found that opinion leaders on Twitter are generally those most connected and involved. K. Hazel Kwon of Arizona State University also found that people were more likely to share or engage with a topic or event that many of their friends also followed, suggesting that anonymity (once touted as a benefit of online interactions) is detrimental to increasing awareness via social media. 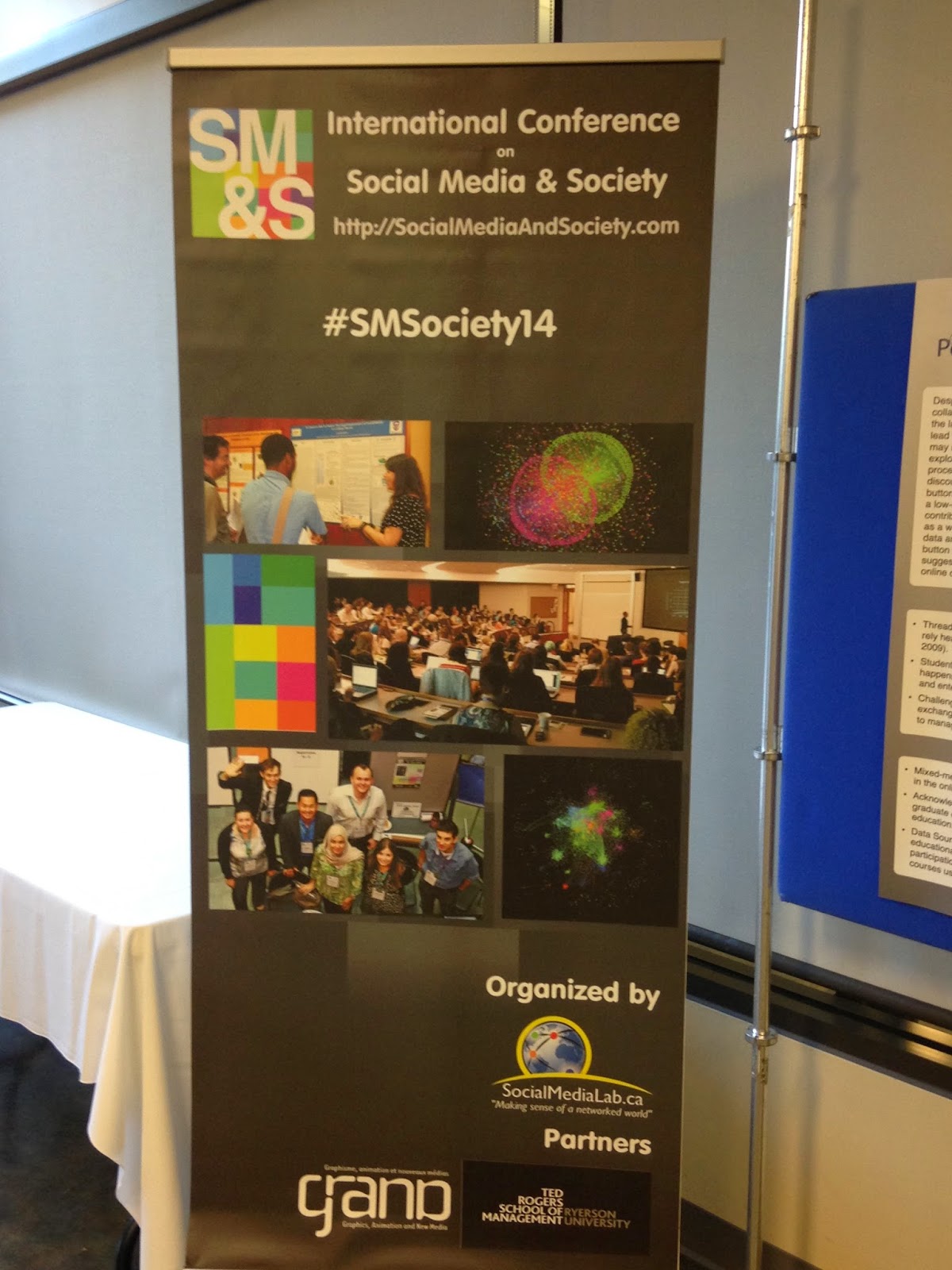 The discussion on privacy and social media raised many good questions for researchers and practitioners. How much privacy should users expect on social media, particularly in regards to their public tweets being retweeted or shared via media outlets? This discussion was largely centered around the @SteenFox “What Were you Wearing” debate. Twitter is a public platform, but the speakers noted that a full awareness of the “public” nature of public tweets was sometimes lacking among users. The thought-provoking question of “are hashtags the antithesis to an expectation of privacy,” given that by their use you join a very public, sometimes global conversation outside of your own network, was raised by Siobhan O’Flynn from the University of Toronto. The main take-away from the panel was that more education is needed regarding what privacy means in social media.

Interesting particularly for BHL were the discussions regarding the role of Twitter in science topics and scholars’ use of social media. Moritz David Buchi of the University of Zurich presented on “How does the representation of science topics differ between news and tweets?” He found that, in general, news outlets were more objective while tweets were more dramatic. Science tweets are also largely not intended to be self-contained, but instead linked to larger news articles. These tweets also operated mostly on a broadcasting model, involving little dialogue. Retweets were most prominent, producing a diffusion of knowledge effect.

Two separate panels discussed scholars’ use of social media. Two separate panels discussed scholars’ use of social media. Anabel Quan-Haase, Kim Martin, and Lori Mccay-Peet cited Gruzd and Goertzen’s paper “Wired Academia: Why Social Science Scholars are Using Social Media,” which outlines three main motives for social media use among scholars: information gathering; collaboration; and socializing and information dissemination. Bonnie Stewart found that scholars participated in social media to voice an opinion and contribute to a discussion, though traditional “power factors” like institutional affiliation affected how well these voices were heard. George Veletsianos of Royal Roads University found that while scholars use social media for knowledge creation (like crowdsourcing) and dissemination, they still struggle with issues of copyright restrictions; negotiating personal and professional boundaries; and a lack of frameworks in academia to evaluate the legitimacy of networked activities, which results in pressure to engage in traditional outreach and dissemination activities. Related to this was a presentation by Heidi Julien from the University of Buffalo, which discussed the use of almetrics (alternatives to the traditional journal impact factor and personal citation indices) to inform tenure decisions. Her experience shows that institutions are still a long way from incorporating altmetrics into these decisions.

BHL partner Smithsonian Libraries also presented a poster at the conference entitled “The GIF That Keeps on Giving,” by Richard Naples. The poster presents the library’s use of animated GIFs in Tumblr, and the increased exposure and reach that this “culture remix” enables. Many of the GIFs are from books digitized for BHL.

Overall, the conference was an excellent learning and engagement opportunity, with many applications for BHL. Ms. Costantino developed a better understanding of the types of posts users are more likely to engage with; how better to craft social media campaigns around storytelling to excite curiosity; why scholars (one of BHL’s core audiences) are using social media and what they hope to find via these outlets; how to better understand, track, and engage with BHL’s online community; and how to help contribute to the case for altmetrics.

* Note: This piece originally appeared on the BHL Blog and is reposted with permission.