Emotions in the Twitterverse and Implications for User Interface Design

This study explores the implications of how user interface elements affect the types of messages that are produced as well as the likelihood that, and extent to which, those messages are spread within an online social system such as Twitter.com, a popular online service for sharing short messages. The current paper explores these issues by studying the dissemination patterns of emotional-type messages among Twitter users through automated techniques, coupled with observations from a survey of Twitter users about their willingness to produce or forward messages containing different types of emotional tone. The results show that Twitter users post more positive messages (tweets) than negative, and that positive tweets are 3 times more likely to be forwarded than negative tweets. The findings also suggest that the Twitter user interface may be partially responsible for this (i.e., the interface reduces the likelihood that negative messages will be posted or retweeted). To enable a wider range of discourse on Twitter and to reduce the need for Twitter users to self-censor their tweets, the paper concludes with a potential design solution that will give Twitter users more control over who will receive their tweets, and outlines a future study to evaluate such an interface.

Gruzd, A. (2013). Emotions in the Twitterverse and Implications for User Interface Design, AIS Transactions on Human-Computer Interaction 5(1):42-56. Available at http://aisel.aisnet.org/thci/vol5/iss1/4 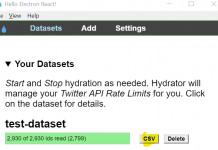